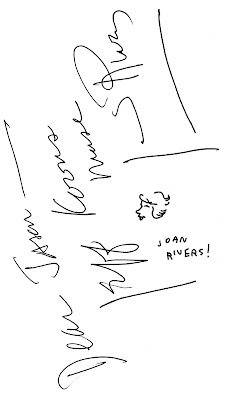 I was leaving the Whitney Museum today with my friend Robin and she said, "That's Joan Rivers." I looked over and saw her and turned to a blank page in my pad. I was nervous and the first picture I drew didn't look terrific so I drew another (this one). Robin then said I should ask her to sign it. Sometimes I will ask people to sign the drawings I make of them but I was particularly nervous to ask Joan Rivers. I am a fan of hers and I was nervous she would say no or say something not nice and it would change my opinion of her. Robin nudged me a bit and I walked over. She couldn't have been nicer. She signed the page with the drawing and asked my name and as I said Jason she wrote, "Jeff." I said, "oh, my name is Jason." She was writing, "Jeff Koons," because of the show I was leaving and she was walking into. She asked if I was an artist and I said yep. I thanked her a lot and she seemed appreciative I asked and I just liked her so much.

Posted by Every Person In New York at 8:32 PM

It was exciting to witness professional essay writers. Thank you for the discount coupons I obtained while placing an order with Essay Writing Ace. They truly helped me out with the most economical prices, and yes, my instructor was extremely pleased with the writing style. The instructions were strictly followed in accordance with the requirements. I would highly advise everyone who sees the importance of high quality to avail essay writing services UK with the best price offers.