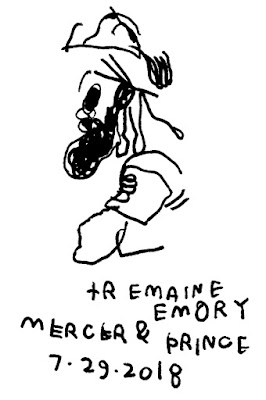 Tremaine Emory on Mercer and Prince Streets
July 29, 2018
Posted by Every Person In New York at 5:40 PM No comments: 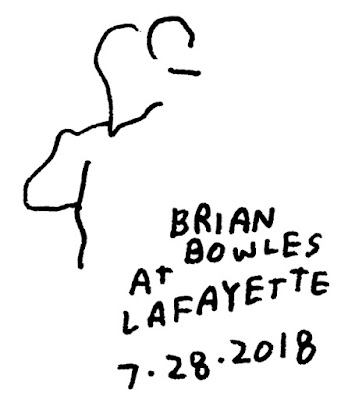 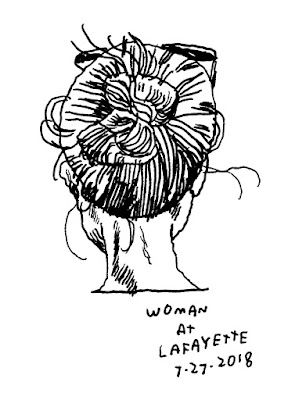 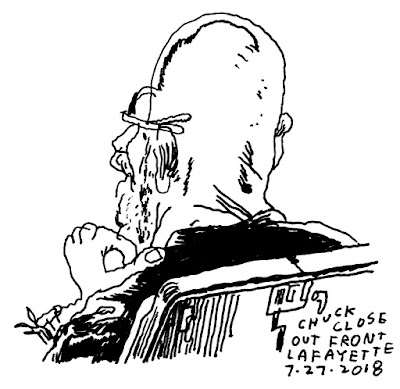 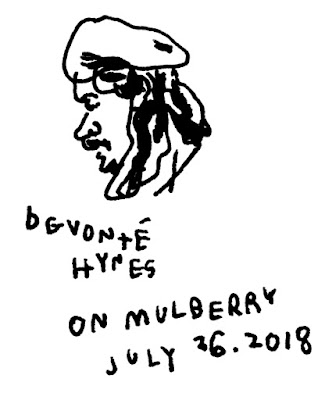 Devonté Hynes on Mulberry Street
July 26, 2018
Posted by Every Person In New York at 6:00 PM No comments: 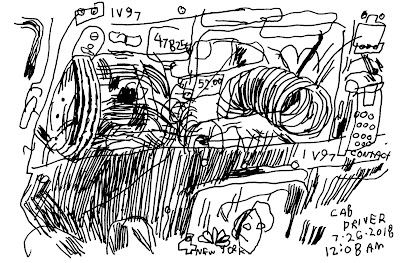 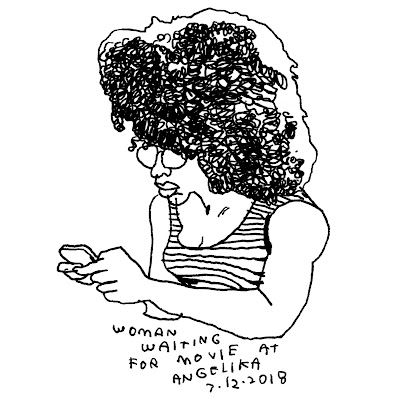 Woman waiting for her movie at Angelika Theater
July 12, 2018
Posted by Every Person In New York at 1:55 AM 2 comments: 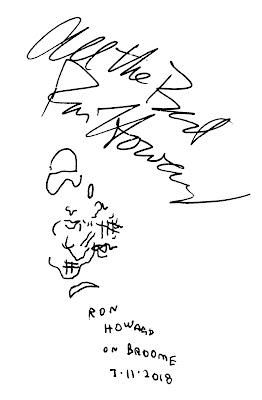 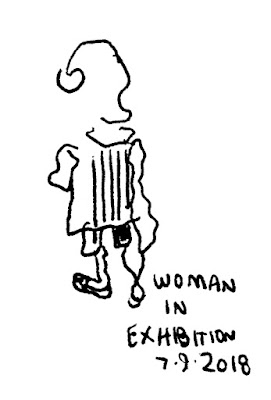 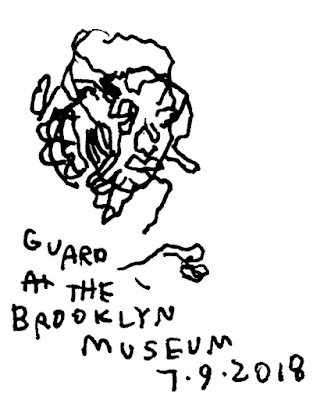 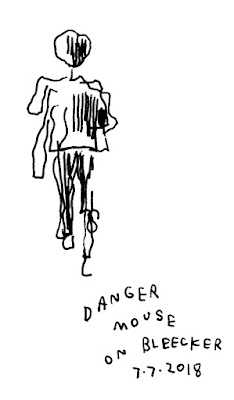 Danger Mouse on Bleecker Street
July 7, 2018
Posted by Every Person In New York at 11:46 PM No comments: 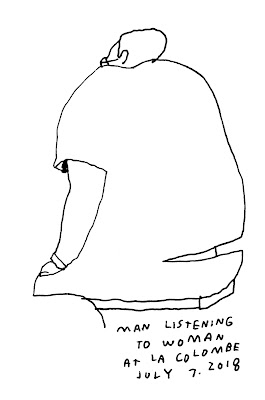 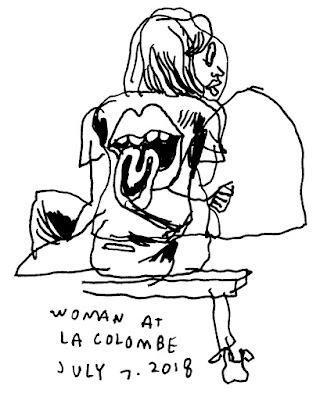 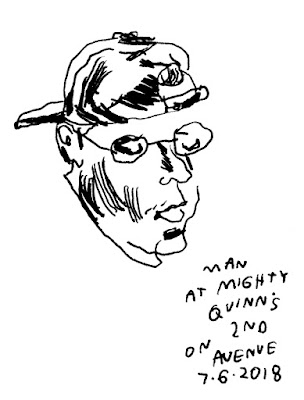 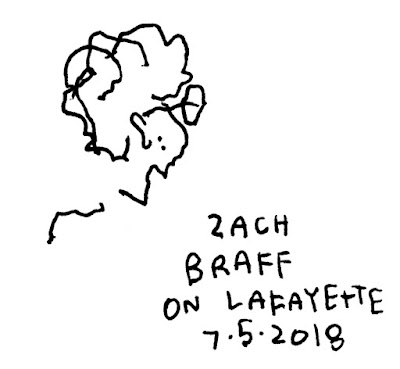 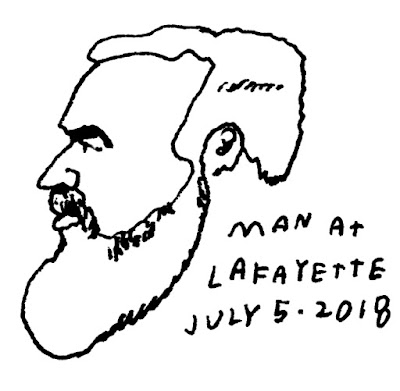 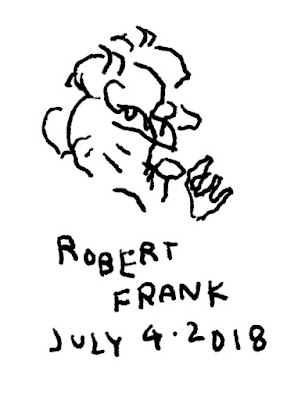 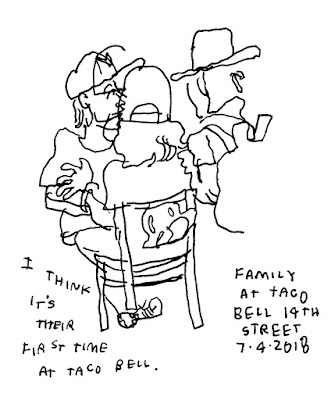 Family at Taco Bell 14th Street
July 4, 2018
Today when I was walking toward the Taco Bell on 14th Street, I saw a woman taking a picture of her daughter as she pointed happily at the Taco Bell sign. They looked excited to be there. I walked in behind them as they met up with the dad (the three of them now, a mom, a dad, and the daughter) and walked toward the front to order. They seemed excited at first but then the daughter seemed hesitant/maybe nervous about the options (The dad said, "You can get nachos!"). The mom was wearing a Yankees hat but I think they were from somewhere else (accents, and, just, how they were interacting in this fast food restaurant (it was almost an enthusiasm (that sounded like a joke but it wasn't))). They let people go in front of them as they looked at the menu. I ordered my stuff and then went and sat down. My order was ready pretty quickly so I grabbed it and took it back to the table. I noticed the mom of the family was sitting on the other side by herself as she waited for her husband and daughter to get the order. She was talking to a woman and man that were sitting in the corner. I do not want to say the wrong thing here/be offensive, but I had a moment where I was a little bit worried about the mom because she just seemed kind of out of place (smiling and open to a conversation with strangers in this slightly odd place (I am not sure how to say this properly. She just looked. . ."green" (not the color, but the . . .9th definition under "green" in Merriam-Webster)). They asked her something during the conversation and she didn't hear them and there was an awkwardness (I couldn't hear the words they were saying but was kind of following) and then she smiled and leaned in a little to hear better, like, "I just missed that what?" and the woman asked her for money. The Mom paused and took out her wallet and looked through and pulled out a very crisp twenty dollar bill and looked at it.
The husband and daughter were walking back over as she did this and she looked at the husband and said something, I think along the lines of, "do you have anything smaller than this?" but he didn't so she handed over the $20 to the woman who asked. It was a weird moment, like, she was nervous but didn't know she had another option. Also, I know things happen and this was the Mom's choice, it just made me feel bad for her and the family. The man and woman talked to the family a little more as they ate their Taco Bell. The man and woman looked like they were about to leave and then they asked the family again for something, but it was just their receipt this time because they wanted to find the bathroom code (which they don't have on the receipts anymore I don't think). They left and I had the thought of giving the family the drawing of them but I stopped myself because I was nervous I would make them more uncomfortable and what do they care about this drawing and also, I didn't want to insert myself that way into their lives. They finished up and threw their stuff out and the mom took another photo of the TACO BELL sign as she was the last one out. As I write all of this down now it feels like not a big deal, and it really isn't in the grand scheme of things. The family will be fine, it just bummed me out a bit watching whatever happened happen.
Posted by Every Person In New York at 11:42 PM 3 comments: 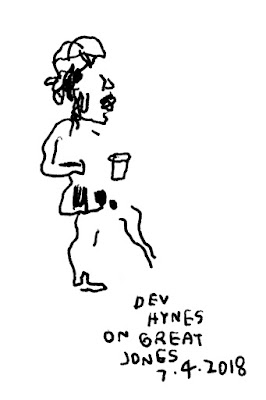 Devonté Hynes on Great Jones Street
July 4, 2018
Posted by Every Person In New York at 11:37 PM No comments: 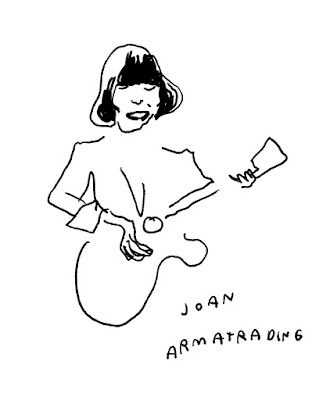 Joan Armatrading playing at City Winery on Varick
July 3, 2018
Posted by Every Person In New York at 11:36 PM No comments: 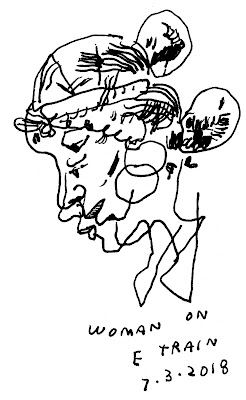 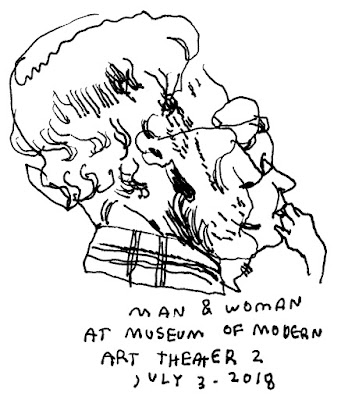 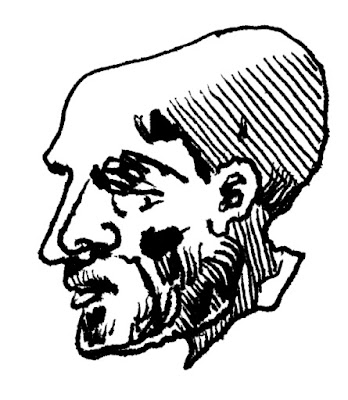 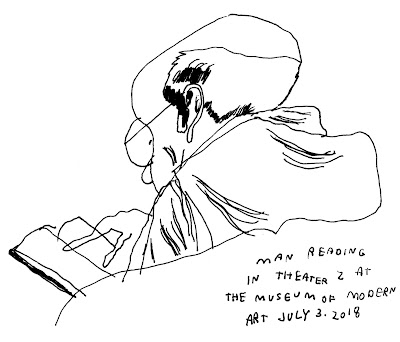 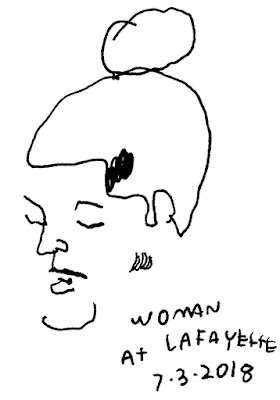 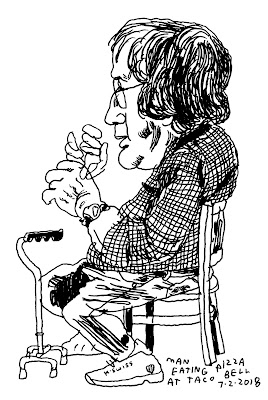 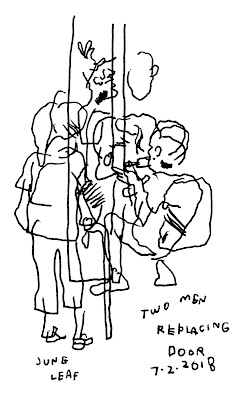 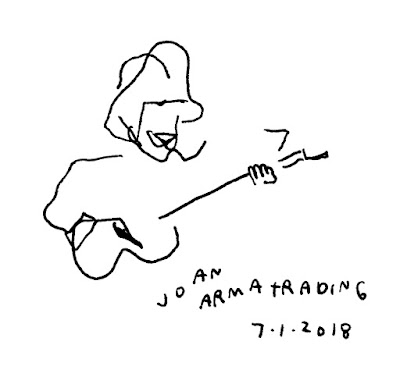 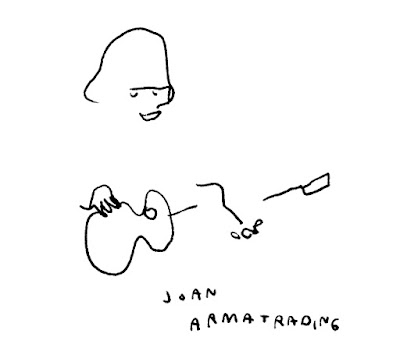 Joan Armatrading at City Winery on Varick
July 1, 2018
Posted by Every Person In New York at 4:38 PM No comments: