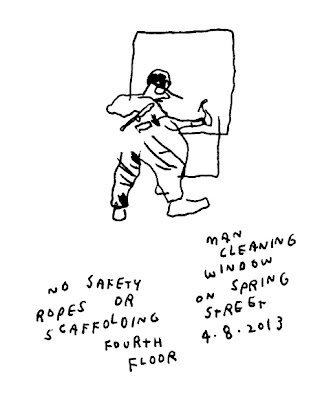 I was sitting on one of the benches on Spring Street between Broadway and Crosby when I drew this man. It was about 10:15 in the morning and the sun was bright on the opposite/uptown side of the street. I was tired and kind of half asleep when the man sitting at the bench to my right said, “Look at this guy.” I looked at him, the man on the bench, and not the guy. He motioned up at the building across the street. I saw this man washing the windows. He was on the fourth floor without a harness. He was just holding on with one hand to the vertical side edge of the window frame as he pulled his squeegie across the glass with his right hand. I have trouble looking out windows that high. I looked at the man down on the street with me and said, “whoa.” The man finished that window, lifted it up while retaining balance with his left leg, and climbed back into the building. The bench man and I were both relieved. Then a fire truck came and parked right out front of the building. The firemen got out and there was a commotion and I looked up again as the window washer looked down to see what was going on.
Posted by Every Person In New York at 2:22 AM

I have experienced the best window cleaner professionals and i found them really best and will suggest you to have them!
Window Cleaning Wellington

Window cleaning is very hard task for me because I have no experience about window cleaning activities and I used a Window Cleaning Sydney service for cleaning of my house windows and I am very impressed from cleaning results of this service. Their professional cleaners are really highly trained and they clean windows of my whole house easily.

I strongly agree with you that while window cleaning, there are no safety ropes and other safety measure used in some places which are really a threat for other public as well.

Thank you for the info. It sounds pretty user friendly. I guess I’ll pick one up for fun. thank u...

Hey Friends how are you Happy new year Friends I want share with you some house cleaning tips hope you like it and easily clean your house. One of the best house cleaning tips you can follow is to hire a professional house cleaner to clean your home for you. Such a professional provides experience and expertise and can ensure you come home to a clean place every day. If you prefer to clean your home yourself, you should keep it tidied, as this ultimately makes it much easier for you to clean.
window cleaning isle of wight

The post shares excellent piece of information regarding cleaning.

Really good post, this will help me a lot in the future

Wow! I am glad after reading that post. I am always searching online for articles that can help me.
Flyttstädning i Stockholm

I value this article for the well-investigated substance and marvelous wording. I got so connected with this Carpet cleaning Waterloo that I couldn't stop examining. I am astonished by your work and skill. Much gratitude to you for such a degree. Regards,

I appreciate how this article was made. It is so informative and exciting to read. This helped me a lot, thanks for sharing this information. Good work! - tree removal Cambridge Park

This article really interesting and informative. I loved the way you explained things in such detail, making them easy for me to understand! denver apartment cleaning services
apartments cleaning services