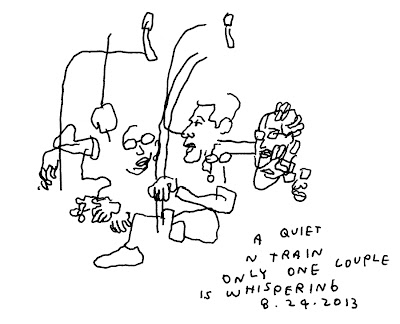 I realized that it was oddly, though nicely, quiet on this train as I was putting a book I had been looking at back in the plastic bag I was carrying.  It was the only noise being made and I thought that I might be bothering people by ruffling the plastic of the bag.  I looked around, there were probably twenty people in the train car and everyone was either nodding off or looking at their phone or just reading.  The two people in the center of the drawing above were having a conversation but they were whispering.  I was not sure why it was so quiet on this train but I liked it.
Posted by Every Person In New York at 10:26 PM